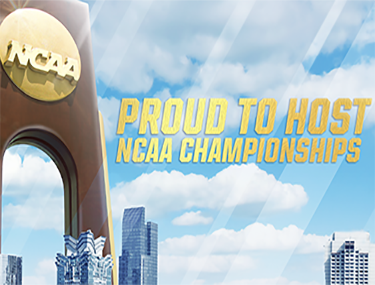 The City of Buffalo and KeyBank Center will host the 2026 NCAA Division I Men's Basketball First and Second rounds, the NCAA announced Wednesday.

Canisius College, along with the Metro Atlantic Athletic Conference (MAAC) and Niagara University, will once again serve as the host group for the event. As previously announced in April 2017, the group will host the 2022 NCAA Division I Men’s Basketball Tournament First and Second rounds as well. Those games will be played at KeyBank Center March 17 and 19, 2022.

The 2026 NCAA Division I Men's Basketball Championship First and Second rounds at KeyBank Center will mark the eighth time since 2000 where the city’s downtown arena has hosted the NCAA’s premier basketball championship tournament. In addition to the 2022 tournament hosting responsibilities, Buffalo has served as a host city for the basketball championship in 2000, 2004, 2007, 2010, 2014 and 2017. Canisius, the MAAC and Niagara have also hosted the NCAA Division I Men’s Ice Hockey Frozen Four on two occasions (2003, 2019).

“It is great to see that Buffalo was awarded the 2026 NCAA Men’s Basketball First and Second rounds, to be hosted at KeyBank Center,” MAAC Commissioner Rich Ensor said. “The ladies and gentlemen from Canisius, Niagara, KeyBank Center, Pegula Sports and Entertainment and the Buffalo Sports Commission are always a great bunch to work with, and are accustomed to hosting first-class events. NCAA Basketball is already set to return to Western New York for the 2022 NCAA Tournament, but it is great to say that it won’t stop there. We look forward bringing these events back to Buffalo.”

“The Western New York community has repeatedly proven to be a great host for the student-athletes, schools and fans from around the country,” Michael McFarlane, Pegula Sports and Entertainment Senior Vice President of Finance & Business Administration, said. “We were already looking forward to hosting this premier sporting event again in 2022, and now we can add 2026 to the calendar at KeyBank Center.”

“The NCAA Men's Basketball Tournament is one of the great events in all of sport,” said Patrick Kaler, President and CEO of Visit Buffalo Niagara. “Buffalo has had the honor of hosting the tournament several times in the past, with thousands of fans packing KeyBank Center and bringing a one-of-a-kind excitement to our downtown hotels, restaurants and bars. It's a dream come true to once again have the opportunity to host this great event and show off our city to basketball fans from around the country.”

“I believe Buffalo and the Western New York region has proven to be one of the premier host sites for the first and second rounds of the NCAA Division I Men’s Basketball Tournament, and this announcement today speaks to that point,” Canisius Director of Athletics Bill Maher said. “To be awarded the opportunity to host the 2026 tournament, which will be our 10th NCAA Championship event hosted at KeyBank Center, is real point of pride for the area. Hosting the NCAA Men’s Basketball Tournament is a community-wide effort and we are proud to partner with the MAAC, Niagara University, Pegula Sports and Entertainment and the Buffalo Sports Commission to bring one of the nation’s favorite sporting events back to Buffalo.”

“Niagara University is proud to once again partner with the MAAC and Canisius College on hosting the 2026 NCAA Men’s Basketball Championship First and Second rounds,” Niagara Director of Athletics Simon Gray said. “The City of Buffalo and KeyBank Center have proven on multiple occasions, including the 2019 Men’s Frozen Four, that they are ideal hosts for elite sporting competitions. Having the NCAA Men's Basketball Tournament returning to this region is a testament to the incredible fan base in this area. We are all looking forward to hosting the 2022 and 2026 first and second rounds.”