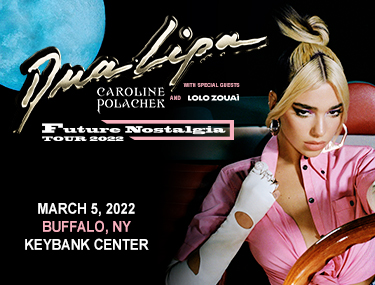 Today, global pop superstar Dua Lipa announced the North American leg of her highly anticipated Future Nostalgia Tour for 2022, in support of the Grammy-winning album of the same name. The arena tour makes 28 stops across the US, including Dua’s first ever headline show at Madison Square Garden in New York City and the iconic Forum in Los Angeles. The Future Nostalgia Tour will also feature support from Caroline Polachek and Lolo Zouaï, with Megan Thee Stallion joining on select dates, full list of tour stops and lineups below. Tickets and VIP upgrade packages go on sale beginning Friday, September 17th at 12PM local here.

The Future Nostalgia Tour is scheduled to visit KeyBank Center in Buffalo, NY on Saturday, March 5. All state and local regulations at the time of the event will be enforced.

“I’m so thrilled to tour again and see my angels in person! How amazing that we all get to dance and celebrate together once again,” says Dua. “When I was writing Future Nostalgia, I imagined the songs being played in clubs on nights out with your mates. I’m so excited that this fantasy is finally coming true. I can’t wait to experience these songs with you together live!”

The long-awaited Future Nostalgia Tour, produced by Ceremony London, promoted by Live Nation and sponsored by Truly Hard Seltzer, will be the first time Dua connects her live vision for this album in-person with fans. Previously, the superstar was able to connect with fans during her record smashing live stream extravaganza Studio 2054, which had over 5 million viewers during its initial airing and featured special guests Angele, Bad Bunny, Elton John, FKA Twigs, J Balvin, Kylie Minogue, Miley Cyrus and Tainy. Dua is already slated to tour the EU in 2022, making this her first world tour run since breaking records during quarantine with her platinum-certified sophomore album Future Nostalgia.

Future Nostalgia is the longest running top 10 album by a female artist on the Billboard 200 this year and was the #1 most streamed album of 2020 on Spotify. It landed on the year-end “Best Of” lists of everyone from Rolling Stone to Billboard and Pitchfork, and spawned multiple worldwide hit singles including the #1 tracks “Break My Heart,” “Levitating,” which is still topping the charts and is the longest running song ever on Spotify’s Today’s Top Hits playlist, and US 4x platinum lead single “Don’t Start Now,” which broke her personal best record of weeks at #1 at US Top 40 radio and is the most streamed track on Spotify’s Today’s Top Hits playlist in history.

In addition to breaking radio records, Dua is also a dominate force on streaming platforms, topping Spotify’s artist chart as the most streamed female artist on the platform and is currently the fourth biggest artist overall with over 65 million monthly listeners. Future Nostalgia now has over 7 billion streams across all platforms worldwide. After receiving 6 nominations at the 2021 Grammys, including Record, Song and Album of the Year. She is now a three-time Grammy winner, having received awards for Best Pop Vocal Album this year and for Best New Artist and Best Dance Recording in 2019. Future Nostalgia was the follow up to her eponymous 2017 debut, which is certified platinum, spawned 6 platinum tracks, and made Dua the first female artist in Brit Awards history to pick up five nominations, with two wins for British Breakthrough Act and British Female Solo Artist.

Hailing from Houston, Megan Thee Stallion is a three time GRAMMY winner, philanthropist and ever-evolving cultural icon.  From the release of her critically acclaimed and Gold certified debut album, Good News, to earning two global record breaking Billboard Hot 100 #1 hits with the “Savage Remix” featuring Beyoncé, and “WAP” with Cardi B, Megan has proven unstoppable.  Megan has been recognized for her musical achievements with three GRAMMY wins, including Best New Artist and nine BET Awards.

Megan was also honored as one of TIME’s 100 Most Influential People of 2020. In October 2020, following a powerful and politically charged performance on Saturday Night Live that demanded justice for Breonna Taylor, Megan published her monumental “Why I Speak Up For Black Women” op-ed and accompanying visual with The New York Times.

Two years since taking the music world by storm with Pang -- her lush and dazzling head-trip of an album -- Caroline Polachek has returned with the infectious single "Bunny Is A Rider." Polachek says of the song: “'Bunny Is A Rider’ is a summer jam about being unavailable. Bunny is slippery, impossible to get ahold of. Maybe it's a fantasy, maybe it's a bad attitude. But anyone can be bunny, at least for three minutes and seventeen seconds.”

Her previous album Pang topped year-end lists globally -- including Dazed, The Guardian, NPR, to name a few. The record's lush romanticism and acrobatic vocal stylings firmly established her as one of the most singular and captivating singer-songwriters of a generation.

Born in Paris to a French mother and Algerian father, singer, songwriter, and producer Lolo Zouaï (zoo-EYE) moved to the Sunset District of San Francisco as a young child when her parents won the Visa lottery. After high school, Lolo spent some time alone back in Paris before relocating to New York City with her mother. It was there that Zouaï wrote her 2018 breakout single, “High Highs to Low Lows,” which propelled her into a series of independent singles, videos, and headline shows around the world, ultimately leading to the release of her highly anticipated debut album in April 2019. Since the release of her album, High Highs to Low Lows, Lolo has sold out headlines across 14 different countries, amassed over 200 million streams worldwide, and appeared in global campaigns for COACH, Tommy Hilfiger, Adidas, Nike, and more. She is thrilled to be supporting Dua Lipa on her upcoming arena tour in 2022.

Ceremony London is a creative production company delivering career defining performances for world class artists. With experience on and off stage, Ceremony deliver touchstone creative from concept to execution. Recent work includes Dua Lipa’s widely acclaimed Studio 2054 livestream, performances at The Grammys and The Brits, and Dermot Kennedy’s spell binding Some Summer Night featuring Paul Mescal live from London’s Natural History Museum. Audience experience is at the heart of our creative process, from the first row to the back of the arena, and through the lens to viewers around the world. For more information, please visit ceremonylondon.com.

Since its inception in 2016, Truly has been the most innovative brand in the category, breaking the boundaries of what consumers expect from hard seltzer. Truly believes no one is just one flavor, which is why it is available in 27 total flavors: 12 delicious original flavors, plus five flavors of Truly Lemonade, four flavors of Truly Iced Tea, four flavors of Truly Punch, and two flavors of Truly Extra. At just 100 calories and 5% ABV, Truly is perfect for any occasion from beach days to backyard barbecues and beyond.

Truly Hard Seltzer, the fastest growing brand in the hard seltzer category, has joined forces with Grammy Award-Winning Artist Dua Lipa to launch the brand’s No One Is Just One Flavor campaign. The campaign celebrates the unique flavors of Truly and the unique sides to each one of us, starting with Dua Lipa.

The campaign debuted on May 22 with a TV spot on Saturday Night Live and will be supported by Truly’s biggest media investment ever.  Set to her platinum hit “Physical,” viewers will see that Dua Lipa is more than a pop star. Among other things, she’s bilingual, a dog mom, and a yoga enthusiast. The spot was directed by world-renowned photographer and director David LaChapelle, and brings viewers into a joyous world full of flavor, with rich imagery and animation.

The brand’s partnership with Dua Lipa stretches far beyond her appearance in the TV spot. She’ll be featured in social, digital, and out-of-home, as well as point-of-sale, where Truly drinkers will have a chance to win more than $1 million in concert prizes, including VIP experiences to meet the pop star and attend a performance this Fall. The campaign will also include “Truly Inspired,” a 2021 summer content and livestream concert series produced by Live Nation featuring artists hand-picked by Dua.  To learn more about Truly, visit www.trulyhardseltzer.com.