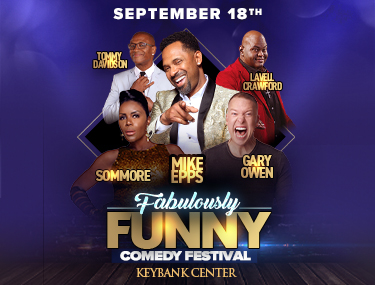 The Fabulously Funny Comedy Festival previously scheduled for Friday, April 3, 2020 at KeyBank Center is postponed to Friday, September 18, 2020.  All tickets will be honored for the new date.  Lineup subject to change.

Refunds, if required, are available at point of purchase.

KeyBank Center Box Office is currently closed.  We will announce when it reopens.

Comedy Heavyweight Mike Epps brings “The Fabulously Funny Comedy Festival” to KeyBank Center in Buffalo, NY on September 18 at 8 pm.  Epps will lead the show with an all-star lineup including Sommore, Gary Owen, Lavell Crawford and Tommy Davidson.  The veteran entertainers will bring down the house with their sharp wit, unbridled humor and hysterical storytelling for a comedy show fans won’t want to miss!

Highly praised for his performance in the Netflix comedy “Dolemite Is My Name” starring opposite Eddie Murphy, Epps is generating an extraordinary amount of buzz among his peers for being not only one of the funniest comic actors in town, but also for his burgeoning dramatic talent.  This summer, Epps released his latest standup special “Mike Epps:  One One Mike” (Netflix), and dropped his single “We Goin’ Out” feat. Big Boi and Sleepy Brown.  Up next, Epps will be starring in the Netflix comedy series “The Upshaws” with Wanda Sykes, “The House Next Door,” sequel to the 2016 film “Meet The Blacks” and “Last Friday.”

Tickets are on sale now and can be purchased online at www.tickets.com, or by calling 888-223-6000.  All tickets subject to applicable service charges and fees.  Lineup, dates and times are subject to change without notice.

Mike Epps has generated an extraordinary amount of buzz among his peers within the entertainment industry for being one of the funniest comic actors to emerge in the Hollywood scene. During a performance at LA’s Comedy Store, Epps caught the attention of Ice Cube. This led to the first of three feature films they would do together: the cult hits “Next Friday,” "Friday after Next," and “All About the Benjamins.” Other features include the Hangover franchise, “Girls Trip” “Faster,” “Hancock,” “Lottery Ticket,” “Next Day Air,” “Roll Bounce,” “The Fighting Temptations”, the Resident Evil franchise, “Bait”, “How High,” “Dr. Dolittle 2”, "Talk to Me", and "Guess Who?"

In her more than 20-year career, award-winning comedienne of “Chandelier Status,” Sommore, has become a trailblazer for women in the comedy business as one of the most successful comedians in the U.S. and abroad. Sommore has been featured in a number of hit films including "Soul Plane," "Something New" and "Friday After Next." Her all-new self-produced comedy special, "A Queen With No Spades" recently premiered on Showtime.

Having performed to sold-out audiences in all the major comedy clubs and theatres across the country, Gary Owen is one of America’s most beloved comedians, having been proclaimed by Ebony magazine as Black America’s “Favorite White Comedian.” Audiences can see Owen in his most recent comedy special, “I Got My Associates” currently on Showtime.  Last year, Owen starred in his own docuseries “The Gary Owen Show” on BET, which chronicled his dynamic and interracial family life with his wife and children in small-town Ohio. Film credits include “Meet The Blacks,” “Think Like A Man,” “Think Like A Man Too,” “Ride Along,” “Little Man,” “Daddy Day Care,” and “College.”

Tommy Davidson’s exceptional range has earned him a reputation as an extraordinary performer. Best known as one of the stars of the hit television show “In Living Color,” his visibility has allowed him to become a household name known for his innovative talent. Davidson’s hilarious impressions of Sammy Davis Jr., Michael Jackson and other icons have become infamous.